JL The fictional and the real have much in common, not the least of which is their location on the map, their quirky residents, and their overall obsession with fish, fiberglass statues, and fish. The only qualitative difference is that fictional has a library, and all the characters there are made up.

On the whole, the people from who contact me have been incredibly kind, funny, and supportive. The rest are busy cleaning their guns, I guess.

MCW Mira James is a woman in search of many things, not the least of which is a normal relationship with a man. Her quest for romance has often gone awry and provided readers with some hilarious moments. Any truth in any of Mira’s escapades? Where do you find inspiration for the mishaps?

JL I see through your flimsy ruse to get me to reveal the pitiful details of my dating experiences. J Mira’s escapades are 34% the product of my wicked imagination, 33% inspiration provided by the relationships of friends and family and other outside influences, and 33% ripped from the headlines of my own life. For example, I force myself to try online dating every spring, and every time I do it, I somehow end up with the guy who thinks it’s okay to pee on the 17th hole of the (mini)golf course, or the man who reveals on our second date that he was actually born a woman, and can he share some hairstyling tips with me? That’s enough to put me in dating hibernation until the next spring, when I try it again.

But straight reality rarely flies in fiction. It’s too unbelievable. So authors tone it down and add creative twists to make it work. That’s why in May Day, the first book in the series, readers see Mira’s “friend” sign her up for an online dating service. Mira winds up on a date with a mild-mannered professor who turns out to be in the midst of a sex change. Because readers have identified with Mira, I hope, and see her as the type of character who has these ridiculous encounters in her life, a toned-down version of what really happened to me works for her.

Of course, anything truly shocking you read in the series is entirely fictional and never happened to anyone I know and especially not to me.

How much of Mira is a reflection of the author?

JL I was at a signing in last week, and I was sharing the time slot with a charming author named Jen. At one point in the signing, an acquaintance of Jen’s came up to buy a second copy of her book and to tell her how obvious it was that the protagonist and Jen were one and the same.

“Everyone says that, but it’s not true. She’s not me,” Jen said, shaking her head.

That’s the answer we all give, right? And it’s true, as far as that goes. Our protagonist is never us, because we would never be that honest, or brave, or passionate, or horrible. The other side of the coin, however, is that our protagonist is more us than we could ever be because s/he is entirely our own creation, with all our fears and hopes amplified for the world to see.

When you write a book, even if it’s a humorous mystery like I write, you lay yourself bare, and it feels necessary sometimes to hide behind the fact that we are not our protagonists, even though that’s not the whole truth. That’s why I like how you phrased this question—I am not my protagonist, but she is a reflection of me. Actually, all the characters in my books are a reflection of me because, if nothing else, I thought they were worth including.

MCW The connection of the titles—all with a relationship to a particular month—is a clever idea. How’d you happen on it?

Thank you. I’m a fan of Sue Grafton’s alphabet mysteries and was the world’s biggest fan of Janet Evanovich’s number series before she started phoning them in. Those two inspired me to come up with my own schtick, so I took a survey of what was out there—the numbers and the letters were taken, somebody else had the astrological signs, there was a herbal series and a color series, what’s left for me? Months. I had the titles May Day and June Bug chosen before I wrote the first word of either book.

Though I initially chose it because I liked the gimmick, it’s turned out to be a good way to create a plot arc because you’re following the characters through a real-time year, with each book focusing on some mystery they need to solve that month.

MCW Of all the kinds of stories you might write, you’ve chosen mysteries. Why?

JL Actually, , it was your writing that showed me the potential of mysteries. I’m continually awed by your deep character development and setting descriptions that pull the reader out of their chair and into the . You also have important themes woven throughout your books, stuff that I was taught you could only find in “literary” fiction—deft explorations into the strength of the human spirit, the forces that divide and strengthen families, and the human flaws that make us who we are. Reading your novels helped me to overcome my personal prejudices about the literary value of mysteries and opened up a whole new world of writing for me.

MCW Tell us a little about your journey to publication.

JL My journey to publication is painful, so I’ll keep it short. May Day was rejected over 400 times before it found an agent, and then another dozen times before it found a publisher. I didn’t give up, and now I’m being interviewed by one of my favorite authors. Life is funny, isn’t it?
MCW You’ve taught writing at the collegiate level. How would you grade yourself on your own writing? And does your sensibility as a teacher spill over into your work as an author?

JL I do make my living teaching English and sociology at a two-year college, and I’m a hard grader. I’d give my early writing a C+ and my mysteries a B+. I’d always like to develop and improve as a writer.

I don’t find my teaching spilling over into my writing as much as I find my writing spilling over into my teaching. My writing makes me more reflective, more able to see the big picture, and more patient with human mistakes. The exception is that I do use my writing as therapy to “fix” bad students. Those who are whiny and entitled often find themselves as awful characters in future novels, but all mystery writers work through their stress that way, right?

MCW is a hotbed of fine crime writers. Any idea what it is about this state that generates so much mayhem between the pages?

JL Initially, I think it was long winters with poor TV reception. You either learned to ice fish, took up quilting, picked up a pen, or started collecting human skulls in the pig barn. Now, I think it’s just peer pressure.You have another book in the series coming out next year called August Moon, then what’s on your agenda writing wise? Do you intend to stay with the Murder by the Month series?

I intend to write twelve books in the Murder by Month series. In fact, I have September Mourn all planned out. has provided more Princess Kays of the Milky Way than any other town in . Why not kill one of them off—a really evil one, a Milk Dud, really—at the State Fair, while she’s getting her head carved in butter? It’ll be a “locked butter-head-carving-room mystery.” Classic.

Before I write that book, though, I have to clean out another story that’s been knocking around my head for a year. This one will be mainstream fiction, and so a departure from my mysteries. I’m tentatively calling it Rosebud, and it’s the story of a Lakota girl forced into a boarding school in 1920s . I’m fascinated and horrified by the history of the time, and the way education was used as a blunt weapon. The people who promoted and participated in mandatory off-reservation boarding schools either thought they were helping Native Americans to acclimate to the “civilization” of the country or thought that they were just following orders, and that banality of evil is a theme I’d like to explore more deeply.

I find myself spending many hours a week researching the history of Indian boarding schools, particularly reading firsthand accounts by students who were there. It’s important to me that I get the story right.

I want a tattoo but don’t have any because I haven’t found anything I’d like as much when I’m 87 with flappy skin as I do when I’m 37 with mostly not-flappy skin. Send any tattoo suggestions and Murder by Month title ideas to me at jesslourey@yahoo.com. Thanks for the interview. J
Posted by carl brookins at 4:41 PM No comments: Links to this post

AFTER DARK: A REVIEW

Author Phillip Margolin is a criminal defense lawyer in Portland, Oregon, where this novel is set. The book reflects its knowledgeable creator. Descriptions set a well-thought-out series of locations, so the reader has a real sense of place and relationship of one to the others. The characters stand up and become real, well-modulated individuals. The novel takes on current trends to bring back and expand the death penalty. But while it is clear where the author stands on the issue, this is not a shrill polemic which refuses to see or even acknowledge the nuances of the issue. Regardless, AFTER DARK is a crackling good story, with enough action, mystery and plot twists to satisfy anyone.

Matthew Reynolds is a nationally known criminal defense attorney, driven by his own obsessive demons. A brilliant tactician, he hires newly minted attorney, Tracy Cavanaugh, as the first woman ever in his practice. When an Oregon Supreme Court Justice is murdered by a car-bomb, she is drawn abruptly into a case with more layers than a German chocolate tort. More murder, illegal deals, betrayal and hidden passion among the players who intersect in many ways, is ultimately revealed.

These revelations, shifting over uncertain moral and ethical grounds, cast a dark shadow over the entire novel. AFTER DARK is a fascinating exploration of the shades of gray in which all our lives are played out, of the moral dilemmas, large and small, we all face every day. Few will guess the final resolution and most will remember this novel well after they finish the last page.

Posted by carl brookins at 5:49 AM No comments: Links to this post

PETER MAY AT ONCE UPON A CRIME 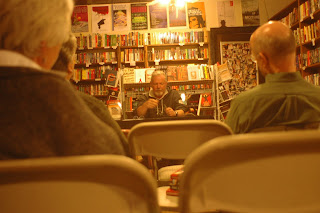 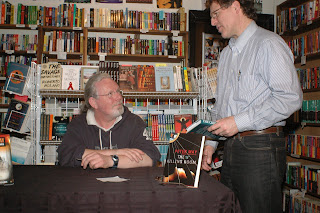 That fine Scots author, Peter May was at Once Upon A Crime in Minneapolis last night, after flying in from Left Coast Crime in Denver. He has many engaging stories to tell, so when he comes to a bookstore near you, be sure to go meet him.
Posted by carl brookins at 1:07 PM No comments: Links to this post

Kent Krueger won the Dillys award for his 2007 book, THUNDER BAY. The Dillys award is presented by the Independent Mystery Booksellers Association of America, for the book they had the most fun selling in 2007. Thus, it is a very important award for authors. The award is presented every year at Left Coast Crime which this year, was help in Denver. I was pleased and honored to accept the Dilly from Tom Schantz, representing the IMBA.
Posted by carl brookins at 2:51 PM No comments: Links to this post