A very long time ago, my parents collaborated to make to me a gift of a beautiful book that my father originally acquired in Lincoln, Nebraska, in 1928. “The Complete Dramatic and, Poetic Works of William Shakespeare,” was compiled and discussed by Professor Frederick D. Losey of Harvard. The book was published in 1926 by The John C. Winston Company of Philadelphia and Chicago. It is a beautiful leather-bound volume of thin gilt-edged pages. The book survived our travails in Goodwell, Oklahoma, between 1930 and 1938. I treasure and refer to it often. And I had the great good fortune to perform a minor part in a community theater production of “Othello,” a good many years ago.

And now there is a companion book, about which, I cannot say enough good things. “Living With Shakespeare,” is a series of essays from a wide array of writers, directors and others about their lives with this astounding writer’s works. Some are funny, some of them are irreverent. Some will engender disagreement and all will add to our understanding of the greatest writer in the English language. Ask yourself; how it is that 400 years after he lived, his plays are being re-interpreted, his sonnets sung, his insights helping us to better understand ourselves?

The book is smoothly organized with a few fine photographs scattered throughout the thirty-eight original essays from the likes of Jane Smiley, Joyce Carol Oates, Isabel Allende, Ralph Fiennes, Ben Kingsley and James Earl Jones. Readers should not neglect to read the excellent introduction by Susannah Carson. Bravo to all the aforementioned individuals, as well as those who produced this handsome volume. Readers should not pass by Harold Bloom’s precise and pointed Foreword that echoes the question so often asked in literature classes, “Why Shakespeare?” And the answer comes still, after four hundred years. “Who else is there?” Who else, indeed.

Posted by carl brookins at 12:08 PM No comments:

One of the worst kept secrets of the Twin Cities art Scene, the Minnetonka Art Center. Here's their website:
Minnetonka Art Center. Right now they have two interesting exhibits up. The largest is from the MN Watercolor Society, their Spring Exhibition. Some outstanding watercolors. One or two artists seem to have cheated (a little) and combined some acrylics as well.
It's a very nice exhibit, well-mounted in a truly excellent gallery space.

The other exhibit I confess a personal interest in: My sister-in-law Mavis, a long-time member of Manamore has been included in their show of  32 pieces. We attended their opening at which the accomplished Minnetonka String Quartet played for a while. 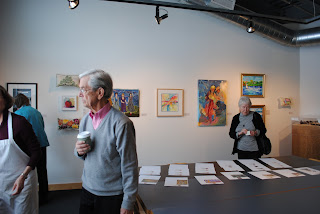 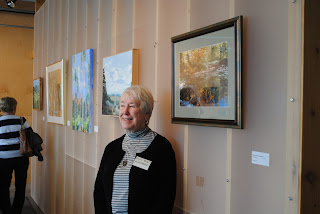 It was impossible to get a picture of Mavis and her photograph without reflection from the glass. But, you can go see the picture in person.

Posted by carl brookins at 9:34 AM No comments:

Good daily journalism is still all alive and well in Minnesota. The Star Tribune in Minneapolis has won two Pulitzers. One is for local reporting. Three reporters won for a story on the alarming rise of deaths in homes where child care was being performed. The other award is for editorial cartooning. This makes four for the Star-Trib. The Pulitzer is the highest honor achievable in journalism, awarded annually by Columbia University in honor of the great publisher, Joseph Pulitzer.
Posted by carl brookins at 6:51 AM No comments: