Dark, intense, at times, unbearably tense. Carries all the hallmarks of a first class thrilller. The novel is,in addition, a first class police procedural. Alexander Rupert is a talented, honored Minneapolis cop. He worked for a very long time doin dangerous work undercover as part of a major task force aimed at bringing down the Minnesota drug trade. Now he faces an appearance before a Grand Jury examining illegal activities of the drug task force.
But the novel begins with a traffic accident that kills one James Putnam who turns out not to be James Putnam. Identity theft? Yes, but with nasty twists that set up readers and characters as well for many well-placed surprises all couched in seamless, powerful prose.
All the characters receive appropriate development and all fit their roles to a T. The language of the third person narration as well as the dialogue is almost perfect. For fans of procedurals and of crime thrillers here is a novel truly not to be missed. And while the conclusion is really inevitable, the ride from beginning to end is not to be dismissed.
Posted by carl brookins at 10:38 PM No comments:

More hijinks, high society, high living and murder. Sean Sean, the short PI in Minneapolis is tasked wih finding who is trying to sabotage a family effort to locate a MIA from WWII in the Pacific Ocean. Will he have to fly off to Yap Island?  Not likely. Maybe a side trip to des Moines.  Watch Sean go toe to toe with some seriously bad dudes. 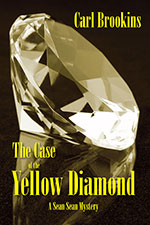 Posted by carl brookins at 12:25 PM No comments:

NOVELS BACK IN PRINT

I've started a private effort to replace and re-energize my earlier adventure/sailing novels. They've been available right along as e-books but this move should widen their availability. They'll have new covers, new design some editing and small revisions. The first one out of the box is OLD SILVER.  The next is the most recent sailing adventure, RED SKY.  RED SKY has never been in print. If these two do all right, the rest will appear in due course, interspersed with the novels backed by my current publisher, the hard-working folks at North Star Press of Saint Cloud. I hope you'll enjoy reading them.
Posted by carl brookins at 8:56 AM No comments:


In spite of David Stout’s recent assertion in the New York Times in his otherwise fine eulogy to author Ruth Rendell, her body of work did not transcend the genre. Her work was truly of the genre, literature, fine and thoughtful writing, as was that of her contemporary, P.D. James. As is the crime writing of many others, from Arthur Conan Doyle to Harlan Coben. From Shakespeare to Michael Connelly, from Georges Simenon to Stieg Larsson. Obscurity and thoughtlessness are not valid criteria for “good literature,” just as cohesion, movement and character should not deny good writing from the lists of good literature.
Posted by carl brookins at 3:51 PM No comments:

From MacPhail Center for Music in Minneapolis, the Bakken Trio of three artists present three classical versions, combined into a single chamber series. The concert on Sunday, April 26, consisted of pieces by three composers all of whom lived and produced around the end of the seventeenth century. All three, Mozart, Boccherini, and Franz Schubert, lived and worked mostly for European nobility and died in poverty. There was no medical coverage and no social security.
Today’s well-attended concert was an excellent selection of Mozart’s Violin Sonata in C Major, Luigi Boccherini’s Quintet for Guitar No. 4 in D Major, and the piano  Trio in B Flat Major by Franz Schubert.
Musicians on the program included Jeff Lambert, guitar, Judy Lin, piano, Stephanie Arado, violin, Helen, Chang, violin, Sabina Thatcher, viola, Pitnarry Shin, cello, with Mina Fisher as host for the program.
The audience was enthusiastic, the musicians accomplished, and the hall was well filled.
Posted by carl brookins at 10:35 PM No comments:

I confess, I wasn’t sure what to expect when I received a request to review this volume of photographs. Although I have worked as a free-lance photographer, my concentration for many years has been writing and reviewing crime fiction. Hence, readers may legitimately question my credentials here.

This book is a stunning accomplishment. During a period of eight years in the first decades of the twenty-first century, the author traveled several times to a remote, sparsely settled, part of Asia to learn about and document the ordinary lives of the people who live there. After graduation from a Canadian university, he eventually established permanent residence in China where he lives and produces award-winning documentaries.

His interest in Turkestan developed gradually and the images contained in this richly produced volume reflect his repeated visits along this section of the Silk Road. Here are images of a modern city closely juxtaposed with people living simple lives, engaged in work that we recall from our history texts of the nineteenth and early twentieth centuries. Here are intimate portraits of citizens of every age, individuals and small groups in formal and informal settings. There are shop owners in street markets, individual customers, factory workers and farmers. Pyle offers the widest possible range of images so that it only requires a casual visit to these pages to acquire a sense of this lonely and special land. And then one is drawn again and again into a more thoughtful and intimate examination of these people, so distant from us in so many way. And yet so powerful in their human-ness. Every time I open the book I am reminded of some of the very early photographs of the people who lived on the Western plains and mountains of North American, before the European settlers arrived.

No expense was spared in the production of the book, the photographs, for the most part are carefully arranged to provide maximum impact to the viewer. I was troubled at times by the rich red borders which distracted my eye from some of the lesser black and white images, and there are cases where the impact of the image is lost because of its placement on the page and the layout strictures. However, these are small caveats in the overall interest this fascinating book of photographs should engender. “Chinese Turkestan” is a thoughtful, interesting and intimate look at the people, the culture and the land.

Posted by carl brookins at 8:00 AM No comments: