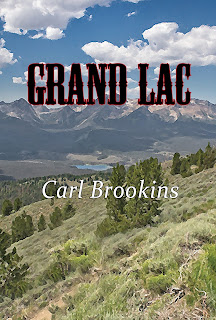 When Edie Black’s son, Sam, is arrested for murder, Edie calls her cousin, Marjorie Kane, in Minneapolis. Kane, a former exotic dancer, turns immediately to her partner, fellow independent special investigator, Alan Lockem. The pair are successful unlicensed investigators who specialize in unusual projects that appear to have strange solutions.
In Grand Lac, Sam Black is accused of murdering a member of a small group of investors who have purchased large lots on a mountain outside of town in northern Idaho. One dark night one of the investors, Jack Ketchum, in a drunken rage, climbed aboard a large bulldozer and carved a raw track down the mountainside destroying vegetation on the property of each of the other owners. Days later his body is discovered in a ravine on the mountain, a bullet hole in his chest.
Sam Black is a young local stock day-trader who has stumbled on some shady city officials’ illegal activities. His mother, Edie, believes that may be the real reason Sam has been indicted for Ketchum’s murder. Alan and Marjorie jump feet first into a strange town of guns and civic corruption in a complicated effort to save Sam from prison or worse.