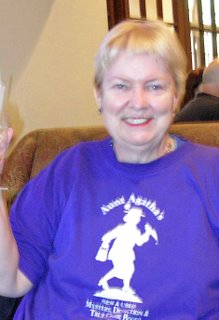 One of my publishers is Five Star Mysteries, an imprint of Thorndike Press.
They're in Waterville, Maine. a nice small community.
I flew out there a week or so ago , and landed in Bangor, where, on the way home, I had an interesting experience.

Bangor is a town of about 35,000. Pleasant, right on the river, not far from the
sea so tides affect the port.

I'm at the airport early for coming home because that's the way it worked
out. Waiting room is quiet, comfortable, I've got my laptop, so no problems.
About three hours to my flight.

A flight lands from Boston, place soon empties out, I see a permanent office witha large electric sign that says MAINE GREETERS. There are displays of Desert Storm unit badges and flags, etc. here and there. I go to the Red Baron Lounge which is empty except for
Tammy the bartender who is sitting on a stool sucking on a Heineken. I order scotch and tell her it's quiet. She smiles and says yeah, sometimes it is. An hour passes and I decide to order lunch. A family of two kids and parents show up and order lunch. We're eating and I hear a squawk from the room behind the bar. A guy sticks his head out and says, "They're
early, just touched down."

Tammy says "Oh shit." Then she turns to the family and says, "You might want to settle up right away. It's about to get real busy in here." They do and leave. I hear applause from across the terminal, coming from people standing in line beside the Greeter office. Suddenly the place is filled with over 200 Marines who have just got off a Trans World (not TWA) military
flight from Iraq by way of Kuwait and Germany. They line up in the Red Baron for beer (mostly) at a special price., many dialing cell phones.

Nice well-behaved kids. Dressed in their tan desert camo gear and tan desert boots. They don't look like they've been to war, but one kid says to me, "Yeah, we saw our share of fighting." Men and women (not very many) who seemed more self-assured than the guys. Bedlam for about an hour. Then the plane is refueled and the Red Baron has placed the catered meals and other stuff aboard, the Marines have made their phone calls and drunk their beers,
mostly Buds, and they file out to reboard the aircraft to more applause. Lapsed time, mabe 90 minutes. Now they are off, non-stop to their base in California.

So I'm curious and Tammy tells me, over a drink she buys, it happens every day, anywhere from six to eight times a day, both incoming and outgoing companies of service men, Marines and GIs. In the space of sixty minutes, the troops consumed 150 beers and over 100 other
drinks.

Turns out Bangor is a prime East Coast airfield from and to which all troops going and
coming in Iraq and Afghanistan are routed.

It was an interesting and unusual experience.

The picture of Margarot Maron in that t-shirt has nothing whatsoever to do with the above piece.
Posted by carl brookins at 12:58 PM