Upper Midwest music lovers who act fast have a fine opportunity to learn up close why the Minnesota Orchestra is so highly rated across the world. The current concert program features mostly the string sections in top-level performance.
We attended a morning so-called “coffee concert” at Orchestra Hall in Minneapolis. The program will be repeated Friday evening, January 31. The orchestra was ably led by cello virtuoso, Paul Watkins. First on the program, a delightful Variations on a theme of Frank Bridge, Opus 10, composed by Benjamin Britten. Some of the variations were wildly surprising and required exceptional precision by the violins in particular. Bright, varied and interesting.
Carl Phillip Emanuel Bach, J.S.’s second son (of 20 total) became a highly successful and creative composer. His Cello Concerto in A major contains numerous surprising passages, ably presented by soloist, Paul Watkins. Unfortunately, the harpsichord was at times, almost lost in the music.
The final piece was Beethoven’s Symphony No.4 in B-flat major. It’s a rousing piece in which the orchestra even presented allegro movements with a verve and up-tempo precision that clearly brought a near-capacity audience to attention. Again, the string sections performed at a high level. On a cold January evening this excellent program and performance will be just the thing for the winter audience.
Posted by carl brookins at 5:40 PM No comments:


Regardless of how you voted in 2016 or how you feel today about the political atmosphere in the country today, you probably agree, the current administration is a great gift to political thriller and mystery writers. What a plethora of circumstances, ideas, possible locations.
I write crime fiction and I review crime fiction. I am widely read in the genre so I believe I have a somewhat informed point of view. You may disagree and if so, I hope you’ll respond to this series of essays.
My imperfect and incomplete recollection of what I was reading sixty years ago begins completely arbitrarily with “Bunny Lake is Missing,” not entirely a political mystery, but there you are. Evelyn Piper wrote the book. It was generally well-received and still receives the occasional thoughtful review.
Blanche is a single working mother who brings her pre-K daughter to a posh day care school and when she goes later to pick up Bunny, the girl isn’t there. What’s worse for the frantic mother is that no one admits to ever seeing her at the school. Thus begins the search with a deep dive into social, political and legal issues. Laurence Oliver starred in a subsequent movie.
Several successful authors were writing in the sixties, including Barry Eisler, Fredrich Forsyth, Richard Condon, James Patterson, and John LeCarre. Some of the more successful novels that appeared then include “Topaz,” “Torn Curtain” and one of my favorites, “Six Days of the Condor,” a turbulent and tortuous novel of CIA problems and solutions.
I’ll have more to say in a few more days. Stay tuned and know I’m interested in comments and reactions. And, yes, watch for the release of TRACES, to be available soon at that award-winning Minneapolis bookstore, ONCE UPON A CRIME, in store or on line.
Posted by carl brookins at 4:37 PM No comments: 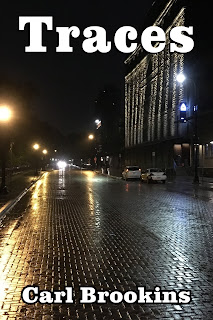 Posted by carl brookins at 4:48 PM No comments:

A handsome evocative cover introduces a riveting tale of kidnapping, identity mistakes, the internal power of a young woman and the kind of inevitable encompassing efforts of law enforcement when called on.
Martina Ramos, a bright college graduate student in immersed in the college grind of prepping for exams at Oxford. Her college friends believe her on break, her family thinks she’s studying, nose to grindstone. Certain other friends believe she’s taking a brief break from a chance encounter with a pop star. The pop star needed a favor, a stand-in to take her place for a few weeks on the party circuit in south Florida. Martina fits the role to a T.
When she awakens in the foul hold of a boat anchored somewhere off the Florida coast, the number of people who truly know where she is has been reduced to three or maybe four. And they are not Martina’s friends.
What follows is a carefully designed increasingly tense and terror filled effort to find the kidnapped college student while keeping her true identity secret, because her family doesn’t have the kind of ransom money being demanded.
As Martina’s family, experienced law enforcement and military types, come together with a small cadre of FBI agents, plans are formed to rescue the girl before her true identity is discovered and before the looming deadline for delivery of the ransom money arrives. The plans and movements which form the bulk of this well-written novel are carefully and logically laid out. Meanwhile, readers are treated to the terror-filled existence of the young girl, contrasted with her tough-minded cautious efforts to extricate herself from the clutches of the kidnappers. The possibility of death for the unfortunate girl is well-explicated in both narratives, that of her searchers and her own interactions with her captors.
The novel is peopled with a range of interesting individuals and their interactions are both logical and well-reasoned so that readers will be eminently satisfied as the resolution looms ever closer. A thoroughly enjoyable crime novel.

Posted by carl brookins at 8:27 AM No comments: